My intention at the beginning of 2014 had been to dine out once a month and experience gourmet raw ‘cooking’ and a reprieve from the daily grind, and blending and chopping.

Obviously, as with all my good intentions, things went awry and by July I had visited precisely one restaurant.

But I finished the year with a flourish. During December I rediscovered the Wild Food Cafe.  I returned to Nama and I had a take away snack from Vantra.

I had last been to the Wild Food Cafe for my birthday about 10 years ago, I’d eaten alfresco during an unseasonably warm December.  This time around it was a classic cold December so we experienced the upstairs-inside of the canteen style cafe with back to back 80s hits playing on the jukebox.

We took two stools at the bar.

I ordered the only fully raw main; pizza and salad and the almond tart for desert. 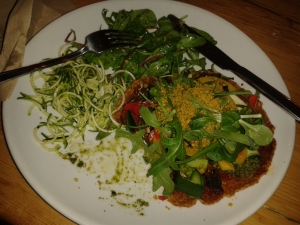 The raw main was adequate however, the kitchen excelled at the desert.  The almond tart was subtle and superb.

My non-raw friend ordered the bell pepper soup and the banana tart. She was impressed with her main but disappointingly we could both taste unripe bananas in the tart.

Despite this glaring schoolboy error I would definitely return to the Wild Food Cafe.  Obviously not for a main (there isn’t a wide enough selection if you are 100% raw) but definitely for a non banana based desert.    The range of deserts is wide, well priced and proportioned.

I went back to Nama and I had the amazing Chilli in the company of Jack Reacher.

It was served quickly, there was none of the half-hour-plus-waiting business of May (and there was a family of four and a table of two already ordering ahead of me); Nama has upped their serving game.

After the delights of the delicate almond tart at the Wild Food Cafe I did not want my staple blueberry cheesecake for desert; I felt it would be heavy and cloying in comparison.  So for desert I took a left field swerve and ordered the pancakes and ice cream from the breakfast menu.

I was disappointed I expected it to be sweet but the pancakes were savoury almost to the point of blandness.  But you live you learn.

This was the place I effort-fully looked for last January whilst impeded with a crutch and a busted knee.   I was pleased to have finally found it!  The raw a la carte menu comes out after dark so I ordered a tea-time raw snack to go.

There is no photograph.  I was on the busy Oxford Street and ravenous so my first instincts were to get the food into my mouth before it was knocked from my hand by the swell of the bustling pre-Christmas crowds.

Hmm the spinach tart had a crispy base.  I’m used to a more chewy pastry (which I think gives a better flavour mix) and I had to wonder was this intentional or did they accidentally leave it in the dehydrator too long.  But it worked and I gobbled it up.

It was amazing to be in a main stream location and find some quality raw food.  I will be back to explore their evening menu.